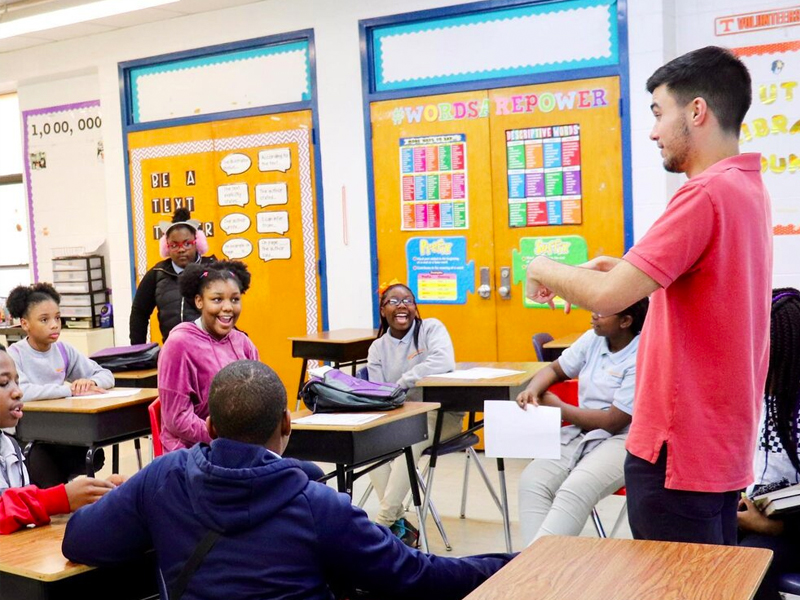 September 15th through October 15th is known as Hispanic Heritage Month and we took the opportunity to meet one of the city’s newest Spanish Educators, Dylan Hooper of KIPP Memphis Academy Middle. Check out our interview with him to hear his passion for language learning!

Q1: You're a transplant to Memphis—a Memphian in the making, if you will. How did you find yourself in Memphis in the first place?

I was born in Nashville and raised in Simpsonville, South Caroline, so I’ve always had a little piece of Tennessee in my heart! I was lucky enough to be placed in Memphis as a part of the 2019 Teach for America Corps. It was my top choice for no other reason than that it was a city that I had heard of in popular culture, but had never gotten the chance to experience.

Q2: What influenced you to major in and ultimately teach Spanish?

Growing up, two things were true: I lived in a monolingual, English-speaking household, and I had no desire to be a teacher. I started learning Spanish in middle school because my parents told me I should and found out that I had a knack for it, but never really thought anything of it other than about the exciting prospects of being bilingual and what that meant for my future career as a doctor/lawyer/underwater basket weaver (basically, anything BUT a teacher). I stuck with Spanish as an academic interest through high school, and I decided to continue my studies in college after taking the AP and IB Spanish exams. In my first semester of college, I decided to declare Spanish as one of my majors just for fun while I focused on a career in clinical psychology.

Around this same time, though, I got a job at a local elementary school doing miscellaneous office and logistics work—which shortly thereafter became a job teaching Spanish part-time to K-5th graders. Finally, after living, studying, and teaching in the Dominican Republic and in Perú, I knew I had found my passion. So, I applied to TFA [Teach for America] from my bedroom in Santo Domingo, did a virtual interview, and when I got back to the USA, I had been recruited to teach Spanish with the 2019 Corps.

Q3: How do you think studying a language contributes to a holistic educational experience?

The research is abundantly clear—studying another language at ANY age is simply an incredible “workout” for your brain! As you acquire new vocabulary in a second language, you’re bolstering your vocabulary and reading comprehension in your FIRST language by seeing new words, noticing things like prefixes and root words, and subconsciously incorporating that into your existing language system. For instance, take the word “contento” (happy/contented). One of my middle school students may not be familiar with the word “contented”, but they DEFINITELY know the word “happy”. So, once they have learned that “contento” in Spanish is a way to say “happy”, they will be able to interpret, or at least be familiar with, the word “contented.” Secondly, learning a second language has been shown to hone your deductive reasoning, logic, and abstract thought. In the same way as doing Algebra or solving a jigsaw puzzle works, learning a language requires you to follow a series of rules and steps to produce a solution—except we call those solutions words and sentences. So, even at its most boring level, studying a language is highly beneficial to students of any age as they hone these fundamental skills.

Finally, studying a language is important for students today because it opens doors to opportunities and perspectives that, without it, they may have never known existed. As future members of the workforce, having basic communication skills in another language makes students more competitive as bilingual/multilingual (jobs) become more and more in demand.

Outside of the superficial benefits of multilingualism like jobs and travel opportunities, language study exposes students to new cultures and ways of life in a meaningful way. Students today have access to the entire world, right at their fingertips. By studying culture in the context of language, students are able to interpret and embrace what they see every day as new and exciting, rather than strange or different. I came across a statistic saying that around 40% of Americans will never leave the United States (11% never leaving the state where they were born). Even if one of my students never leaves Memphis, it is my goal (and should be the goal of all world language classes) that they appreciate and see value in the contributions of other cultures and societies. Studying language allows students to increase their cultural competence and empathy towards others—something that I think we could all use a little bit more of.

Q4: September 15th through October 15th is Hispanic Heritage Month. I thought it was odd learning that it wasn't the 1st through end of a calendar month, but started in the middle of September. Why is this so and how are you incorporating this into your lessons with students?

Before we get into it, I think it’s important to clarify a few terms. “Hispanic” has to do with language, and refers to anyone with Spanish-speaking ancestry. “Latino/Latina”, on the other hand, has to go with geography, and refers to anyone with Latin American ancestry. “Latinx” functions similarly to “Latino/Latina,” but does away with the concept of grammatical gender inherent to Spanish to include non-binary, gender non-conforming, and gender-expansive people.

Latinx/Hispanic Heritage Month actually started as Hispanic Heritage Week, signed into law by President Lyndon B. Johnson in 1968 in the midst of the Chicano Movement as a part of the larger American Civil Rights Movement. September 15th was chosen as the start date for Hispanic Heritage Week because it is the anniversary of independence of five Hispanic countries: Costa Rica, El Salvador, Honduras, Nicaragua, and Guatemala. Also falling within that week are the independence days of Mexico (9/16), Chile (9/18), and Belize (9/21). In 1988, under the Reagan administration, Hispanic Heritage Week was extended to the 31-day celebration we know today, and was first officially proclaimed by President George H.W. Bush. They maintained the original starting date of September 15th due to its significance to so many countries, and extended the celebration to October 15th. Over the last two years, there has been a shift towards calling the month “Latinx Heritage Month” in order to represent groups not included under the umbrella of “Hispanic”—non-binary, gender non-conforming, and gender-expansive people, as well as indigenous populations and Brazilians, who may or may not speak Spanish.

In the day-to-day, I like to think that we celebrate Latinx peoples and cultures in my class. During Latinx Heritage Month, we do things like study the geography of the Hispanic world, learn about important Latinx cultural icons (last year, our favorites were Cardi B and Carolina Contreras, founder of Miss Rizos Salon in Santo Domingo), and discuss things like history, foods, celebrations, dances, and cultural customs. This year looks a little bit different due to the virtual format, but I’m excited to see where this year’s celebration takes us!

A plus side of the virtual format has been that I have had the chance to deliver unique instruction to my heritage speakers—students who have learned Spanish informally by being exposed to the language at home, but that have limited or no formal education in Spanish. This month, we have been able to discuss the concept of identity in the Hispanic community from a historical and social perspective with the goal of understanding who we are, where we come from, how we talk about it, and how we can shape the future of our communities. At the end of the month, we’ll be presenting what we have learned—you can follow us at @kmam_spanish on Instagram to check it out!

Q5: In public school, I never had the opportunity to take foreign languages until high school. What advantages do your middle schoolers have?

I think I’m the world’s biggest proponent of the idea that ANYONE can learn another language at ANY age. However, neurologically, our brains are more plastic when we are younger. That means that we can more readily form and expand neural connections. According to a study out of UCLA, the brain systems responsible for language learning and bilingualism grow the most rapidly between the ages of 6 years old until puberty, placing elementary and middle school students at the prime spot, neurologically, for successful acquisition of a second language. Secondly, younger learners have more time and less to un-learn and re-learn when it comes to adding a second language.

By the time we are adults, we have drastically larger vocabularies and more crystallized systems of grammar and syntax, which all translate to more difficulties learning and employing the rules of another language. So, when you’re suddenly presented with concepts like grammatical gender and inverted syntax, you not only have to learn new “rules,” but you also have to actively avoid regressing to the comfort of your native language’s systems out of comfort or convenience. Younger students that are still in the process of learning the nuances of their first language can more easily adapt and change their mental schema to add these new rules to their concept of language as a whole, rather than seeing them as a separate, unrelated set.

Moving away from the science, learning a second language from a young age is just more fun! We dance, we sing, we rap, we get loud, we act silly, and truly throw our entire selves into learning the language. I think there’s a lot less fear and shame in childhood (yes, even in middle school), which allows my students to make mistakes and be creative with the language rather than becoming discouraged and stagnant when they can’t speak fluently after one month of class.

One of my favorite parts about working with younger students is the excitement factor. My kids cling to every new word, and even if it’s the only word in Spanish they know, they are excited to use it and show off both in and outside of class.  Also, there’s a lot less pressure for a middle schooler taking Spanish because the stakes are just lower. In high school, you need the language to graduate. As an adult, you need the language for a job or for a trip. After middle school, there’s always a deadline to meet or some sort of pressure to learn a language quickly. Sure, my students receive a grade for my class just like any other class, and we do a lot of hard work, but there is also space and time for students to give themselves grace and to commit to real learning, rather than learning for a specific purpose.

Q6: You've been in town for over a year now, fortunately experiencing Memphis B.C. (Before Covid). What are your favorite things to do to enjoy the city?

Even though almost half of my time here so far has been spent cooped up in the house, Memphis has become my home. When I’m not teaching, I sing with the Memphis Symphony Chorus and enjoy going to concerts of all kinds. I’m also a HUGE foodie, so I love trying new restaurants around town (my favorite Memphis food is the Lemongrass Tofu from Pho Binh in Midtown…move over BBQ!) But honestly, my favorite way to enjoy Memphis is on a scooter zipping around Downtown —I don’t think there’s a better way to see Memphis and find new adventures!

Meet one of Dylan’s students, Heydi Caldelas-Flores, reading Are You My Mother in Crosstown Arts’ Storytelling video series.

Please confirm you want to block this member.

You will no longer be able to:

Please allow a few minutes for this process to complete.

You have already reported this .